Even though I have lived Downriver for over ten years, I have never been to BLB (Big League Brews) in Taylor. In fact, I have never even heard of BLB until a few months ago amid all the vegan chatter about their chicken tenders and ranch. After being told about their vegan options for a few months, I decided it was time to see for myself.

And thus, my experience at BLB unfolded… 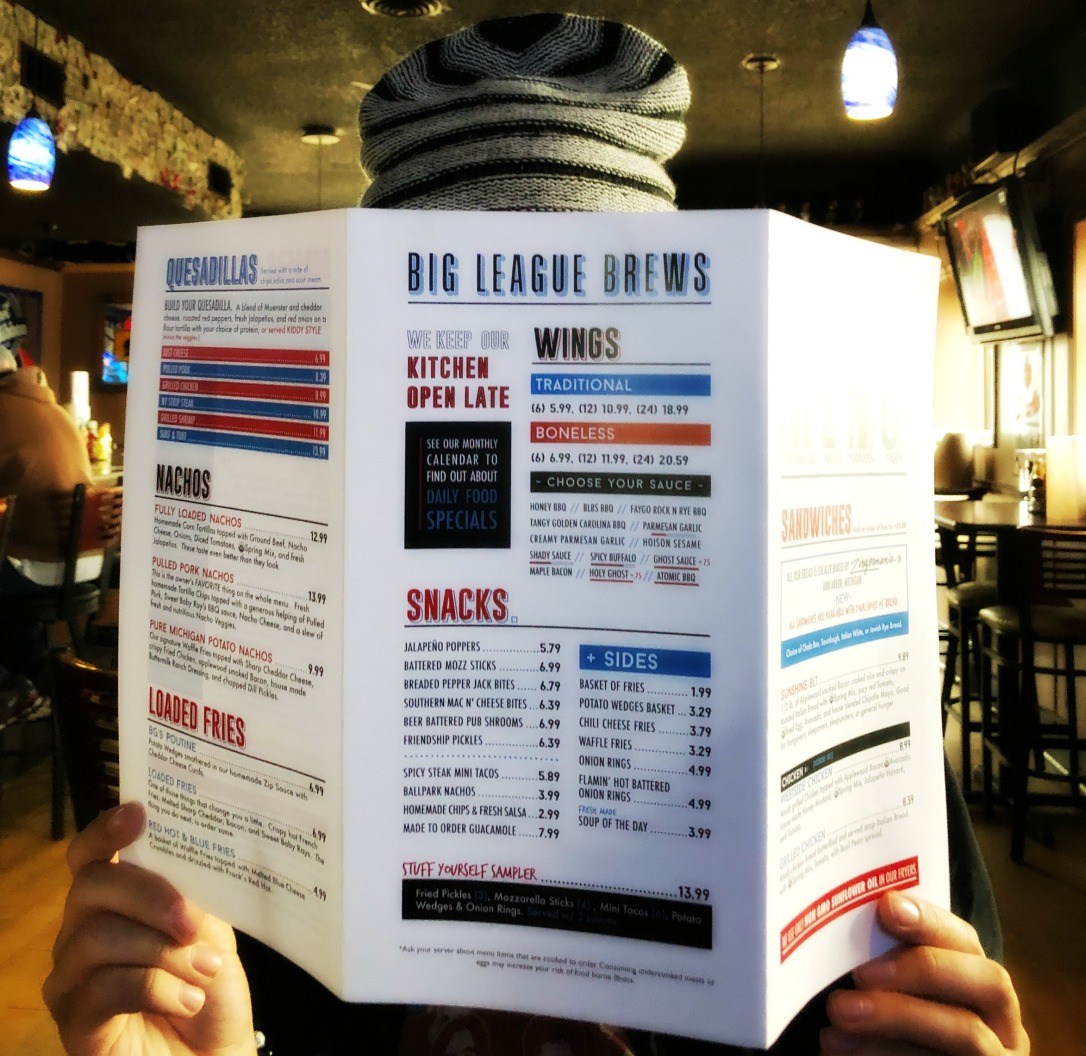 Walking in, I felt like I was at an ordinary pub. Lots of dark wood, beer signs, TV screens, mid-day dimness, and a few people scattered along the bar counter. And because ordinary pubs are typically not plant-friendly, I certainly did not feel like I was in a place that would offer vegan options. But even if I hadn’t heard of their options, I would have quickly become aware as BLB proudly displays their vegan meals smack-dab (yes, I said smack-dab) in the middle of the menu. Thank you for making it easy, BLB! 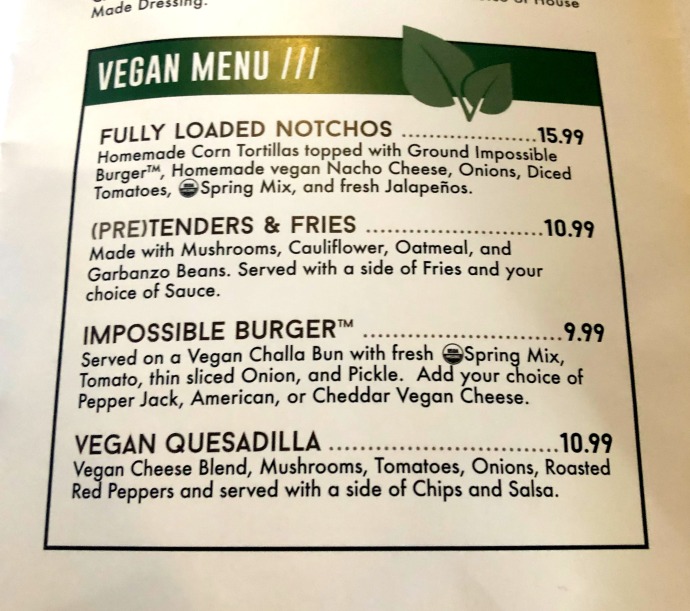 As you can see from the photo above, there were four options to choose from. The Impossible Burger was quickly eliminated from my choice. Not because it’s not good. It’s actually quite delicious, but it is also currently quite common. And if you are a restaurant owner reading this and you don’t have something as simple as the Impossible or Beyond burger available on your menu, you are falling behind and should really take a moment to see how quickly this vegan movement is catching on! I didn’t go to BLB for the burger that I could get down the road, I went there to try their unique options…Loaded Nachos, Tenders, and a Quesadilla. All items that I don’t believe to be offered elsewhere Downriver. Not only are these options unique, but many of the ingredients are created by Chef Tom rather than pre-ordered processed food shipped from a vegan company. While there’s nothing wrong with the pre-ordering of processed food in a restaurant, the fact that a chef took the time to create something to welcome all guests speaks to the vegan heart…well, it at least speaks to mine. Take that for what it’s worth.

I, a vegan, ordered the nachos and my son, an omni, ordered the chicken tenders, and here is what we thought…

Nacho cheese. It makes the world go ‘round. Am I right? Many vegans know that this is a rare thing to find in the stores, at restaurants, pretty much anywhere. So, I am going to start with the cheese, because, honestly that’s the only reason I ordered these bad boys. The cheese is one of the ingredients created by Chef Tom. It is a thinner cheese sauce, smooth with a soft base of cheesy flavor and a subtle touch of nacho-flavored-heat that grows just a little with each chip you eat. It is delicious. I ordered without the spring mix for allergy purposes and picked off the jalapeno peppers out of fear. Sometimes I’m brave, sometimes I’m not. I wasn’t so brave at that moment. What was left was the cheese, Impossible burger crumble, tomatoes and onions. A tortilla chip that contained all of the above was delicious every. single. time.

Some things you should know when ordering – The burger comes as large crumbles of meat. If you like that, then it will come perfect for you. Personally, I will ask for smaller crumbles next time. Also, these come with a good amount of cheese, but because the sauce is a thinner consistency, it travels to the bottom. This reduces personal control over how much cheese goes on each chip when it is grabbed since you can’t get to the extra until you see the bottom of the plate. Don’t get me wrong, a lot of the cheese is appropriately dispersed and most of the chips are coated, but I am a nacho eater that has to have each chip just right by my own manipulation.  Finally, if you are a slow eater (or are busy taking notes on your experience for fifteen minutes before you eat), the chips do get floppy.  They were still yummy, and as I type about them I want to drive out for more, but they were floppy.  Noting, again, that I let them sit, so that may be all my fault.  Now don’t in any way allow my personal critiques to deter you from these nachos, because trust me, they are good.  It’s an easy fix that I will request the next time I go: Smaller crumbles and cheese on the side, please!  This allows the chips to stay crunchy no matter how long I ignore them while giving me control of just how much cheese and toppings are in every single bite.

Finally, while these nachos are truly amazing just the way they are, I think that a perfectly created sour cream to top them off would be mind-blowing…kinda the same way the BLB ranch pushes their tenders to a taste level that I am going to try my best to explain; although, there really are no words.

These were ordered by my son, but I, of course, stole half of one. After all, I had to try one for the sake of the blog, right?

A vegan’s version (aka mine): First I will say that I was super stoked that these came with battered fries. It has been years; and if memory serves, they are similar to Rally’s. Oh my. As for the chicken, the batter is a delicious, perfectly crispy bread crumble and the inside had a meaty texture. Not exactly a chicken texture, but chewy none-the-less.

Biting into it tasted like chicken, dumplings, and chicken-soup all rolled into one. Holy hell, it was good. And that was without the ranch. The ranch at BLB is another food item specially created by Chef Tom. Wow. This is where words cannot explain how good the experience of these tenders and ranch are. I would have to say that this ranch is probably one of the best I have ever had…even from my meat-eating days. Amazing. The consistency is spot-on. The flavors are spot-on. And when that chicken tender is dipped into that amazing sauce, seriously, forget about it. And yes, the fries dipped in the ranch? Also good. This was one of the best vegan food experiences I have had since I went vegan over four years ago.  Easily in the top five.

An omni’s version (aka my son): Let me tell you a little about my son. His mom is vegan. Therefore, he does eat vegan food often…foods I cook for him and restaurant foods I have him try. His responses to date have either been “NO”, “It’s okay”, or “Yeah, it’s good”. For the first time ever, my boy was happy to eat a vegan meal and said things like “Amazing” and “Very impressed”. In fact, talking with him afterwards, he told me that any time he goes to BLB, he plans to order the chicken tenders and nothing else…no meat options can touch those tenders in his opinion. This came from someone who looked at the menu and was hoping to just make it through the meal after seeing the ingredients which included veggies, oats and beans. Good Lord, I thought I would never find a vegan meal to satisfy that boy’s tastes!

Some things you should know before ordering – Because I was planning on stealing some chicken from my son, I was worried that three tenders would not be enough. My boy eats. But we went with the normal serving of three anyway and decided to order more if necessary. Half way through he was filling up and by the end couldn’t even finish his fries. Based on the ingredients in the menu, these may only be made from veggies, but they do contain protein that is just as complete as meat. So, don’t let the low tender count scare you, they are filling. And by the way, did I mention how delicious they are?  The picture displays extra ranch, which there is a charge for.  So don’t plan on such a large cup of deliciousness unless you request it.

The service, for those interested, was good.  There appeared to be one server, who was also the bartender and bus person.  A few tables filled in while we were eating and she handled the bar and all the tables very well without any stress…well, if she was stressed it didn’t show at all.  Chef Tom did bring us our food and checked on us to see how we were liking his vegan creations, which added a very nice and welcoming touch to the visit. 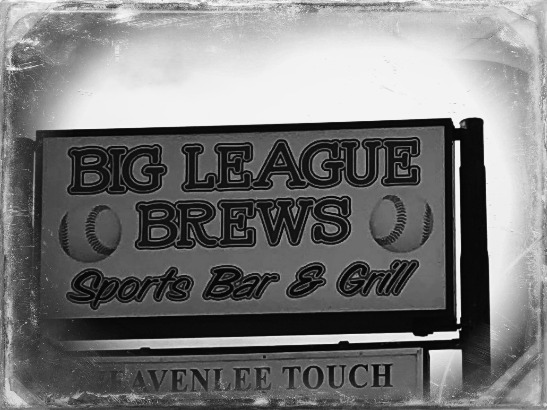 I’m going to summarize by saying that Chef Tom did a great job of getting to the core of what vegans want in a meal out. We just want what we used to eat minus the cruelty. We want it to taste amazing, and more than anything, we want good cheese and creamy sauces! He does that. And speaking of cheese, I will be going back very soon as I will not be complete until I try that quesadilla that has three, yes three, different cheeses in it. My goodness!

Thank you, BLB, for offering vegan options and thank you, Chef Tom, for making them amazing!

View all posts by SherryM

There are many reasons people choose to go vegan.  We recommend the following documentaries for a full description of each reason why.  To improve your health, watch the documentary Forks Over Knives.  To help fight climate change, watch Cowspiracy.  To fight animal cruelty, watch Earthlings.  These three documentaries are the vegan bundle.  Any “why” you want answered is in these three movies.  Once you know “why”, come back here and request a mentor; we are very happy to help

Did you know that Veganism is one of the fastest growing lifestyle movements?  As of 2017, the movement has grown by 600% since 2014! Make no mistake, it is going to continue to grow at amazing rates.  Why?  Because a plantbased lifestyle helps to prevent and can even cure disease.  Because the best way to fight Climate Change is to reduce and ultimately remove animal agriculture.  And because people are waking up to the extreme cruelty found in the meat industry.  The following companies have seen the growth and are securing their place in the huge market to come: Tyson, Breyers, Hellmans, and many others.  I have personally watched the amount of vegan options at Kroger and Meijer grow at an amazing rate over the past few years.  Even Aldi has jumped on board and offers a good amount of vegan items.  The demand is there, are you going to jump in?

Many vegans have no issue with going to a meat-based restaurant.  We only ask that there is a selection for us as well.  A vegan meal does not contain any of the following ingredients:  Meat, fish, egg, honey or dairy (butter, milk, cream, whey, etc).  If you are interested in becoming vegan-friendly, contact us.  We are more than happy to help you brainstorm delicious vegan options for your menu.  Already have two or more full meals on your menu and want to be added to our list?  Email a copy of your menu to TheDownriverVegan@gmail.com and we will consider adding you to the list!